Mermaids in space and other poetic licenses

Mermaid in space! only in SL. I love this place.

Winter (my partner Realm of Winter) wrote a song about SL and made a music video. He even sang the lyrics. I love it! (ok, I might be a little prejudiced but it’s cool because it captures the fantasy element of hanging out in SL: my favorite line: We can hang around in a spaceship to Rigel 2. I’m a Star Trek and Firefly fan so that really gets me.)

Location (on our sim, anyone is welcome):
maps.secondlife.com/secondlife/Malacosoma/51/113/2579

I didn’t have Winter’s explosive image so when I recreated the mermaid shot, I used a galaxy image from
www.nasa.gov/image-feature/goddard/2019/hubble-catches-2-…
The hubble telescope captured two galaxies. If you don’t visit Nasa.gov, you’re missing a very cool site. The image is no longer at our spaceship site, instead you get the regular SL mainland skies. We are pretty close to the border of Linden lands and my galaxy prim was returned to me. Sorry about that.

Driving 2 by Shutter Animations (although I don’t see this on their MP and their inworld location has moved or is gone). I like the animation because it looks like I am bopping my head to music while I’m driving (a spaceship!)

My favorite mermaid tail: (Jhan my SL bestie Jhanelle Bonde-Galtier told me about this so I bought if off MP. I love how it moves. Now that Winter is making videos, I’m interested in things that move):

top: A/D/E tsubaki[gold]Maitreya by r2 Fashions (this is a different top than the video because honestly I don’t remember what I wore in video. It was just one of those times Winter and I were just hanging out and I didn’t think to make a styling card or anything. So when I tried to recreate the scene to create a photo, I had a slight problem. However, I love R2 stuff though; I drop them into 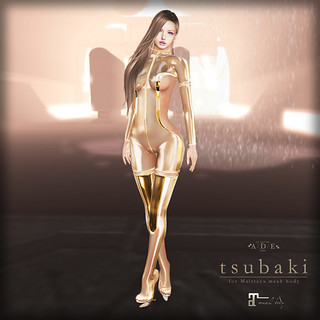 my sci-fi folder because they are perfect for that! However it is a one piece outfit like a romper so I had to do a slight edit in Photoshop. I took one photo with me topless in the mermaid tail and one photo wearing the Tsubaki outfit. Then I erased the part where the outfit overlaid the tail. You can see the original outfit at https://www.flickr.com/photos/rei2aya/32545993156/ by re2aya. This image is copyrighted by re2aya from her flickr feed. If you look closely, you see the outfit ends in minishorts just above the boots. You can also view it at her R2 Fashion store .